So I calculated with the fk8 type r Injector duty cycle vs total injector output the a 250 cc meth injector would yield about ten percent meth injector vs Direct injection fuel output. The question I have is it supposed to be a 50/50 water mix to achieve ten percent mix or are you supposed to double it so total methanol lbs fuel is ten percent. 50/50 total equals a 250cv jet but using ten percent meth vs fuel not calculating water is 500cc. I calculated fuel at WOT total injector output is a bit over 2500cc if fuel. The reason I’m not going by estimated whp is cause direct injection doesn’t use the same amount of fuel vs port.

Second question is what do most people get power wise out of meth stock turbo. I’ve already managed over 375whp before I updated to my most recent tune which is more but no exact number. I can’t imagine pushing the stock turbo much harder.

I’m I am experienced in tuning using ethanol, high octane and pump gas but never tuned for meth. It’s not that I can’t it’s just that I haven’t before.

thanks for those who reply. Please actual experience would be preferable as anyone can look up forums and spit numbers out. 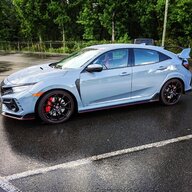 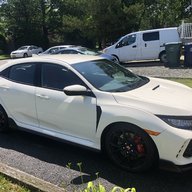 Straight m1 is corrosive and the difference in power between on turbo or supercharged full m1 vs mix is not worth the risk. I never asked what mixture I should run I asked injector nozzle size and how much gain would the fk8 get.
It was a correlation to meth vs total injector output.

turbociv910 said:
follow redstarmotoring on IG.. he has a bunch of stock turbo fk8 with meth dynos.
Click to expand...

I don’t trust his numbers his dynocom dyno reads 15 percent higher than most dynos. Plus mustang dynos have user based smoothing which both scenarios change output numbers drastically. Both dynapack and dynojet have only standard and British hp.
His tunes push the stock turbo too hard. That’s why his tunes tank after 5800 and drop 50whp by 6800. After 6k the stock turbo drops from 26 on fbo car to 22-23. Even so I made consistent power with only 8whp drop by 7200. His tune literally looks like as if I didn’t add timing and just threw a bunch of boost at it. Being full e50 can’t pull more than 396whp on fbo ots hondata fuel system map and not more than 429whp On stock turbo on a dynojet custom tune the odds of just adding meth being greater than e50 which is higher octane mixture is extremely slim.
ted star motoring bosts big numbersyet real world stock turbo isn’t any faster mph in 1/4 mile. That literally proves he’s not making 50whp more than any one else.
I’ve done my research on type r to say the least but I see to no one showing before and after meth tune. Only final results. Plus saw a post saying red star made 440whp on just 93 and fuel system. Meth should be considerably higher even with out fuel system.
I need info I can trust.

Jpierro79 said:
I need info I can trust.
Click to expand...

turbociv910 said:
he posts dynos graphs from shops all around the country from remote tunes, just saying. Only source of meth graphs i know of.
Click to expand...