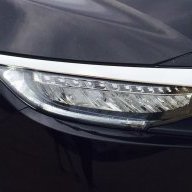 I really love this colour. It kills me that its not available in Canada. I'm buying a Touring later this year and im really hoping Cosmic Blue comes to Canada for the 2017 model year.

Any pics of an ex-t cosmic with tint? 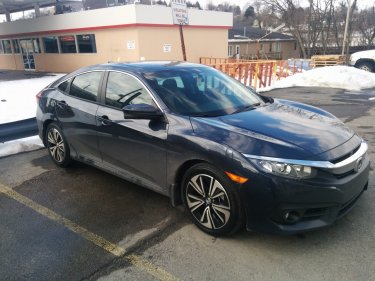 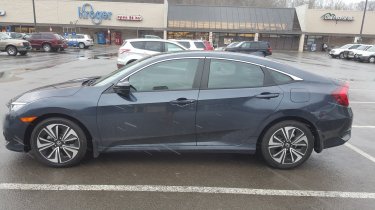 Ah thank you! what tint % is that? 35? Deff want to get mine tinted now looking at it. Thanks!

RakSiam said:
can't dealers order them? Seems like if you are having trouble finding one it shouldn't be that hard to get. Unless you're really in a hurry or something. Maybe I'm just too used to MINI world where a large percentage are customer orders?
Click to expand...

Your mileage with different dealers will vary. The dealer in my city insists that they cannot order specific configurations. Another dealer in a town an hour and a half away has told me they could get me anything I'm looking for. It may have something to do with the dealership management and what they allow salesmen to do. They aren't particularly a high volume dealer in my city, so they may just want to move the cars on their lot.

sjames said:
Ah thank you! what tint % is that? 35? Deff want to get mine tinted now looking at it. Thanks!
Click to expand...

corbygray528 said:
The dealer in my city insists that they cannot order specific configurations. Another dealer in a town an hour and a half away has told me they could get me anything I'm looking for.
Click to expand...

Both statements are likely true. The first one (and the second one, for that matter) can't just tell Honda that the next car for them should be a specific color combination and trim level, since Honda doesn't build cars in random sequence like that. The second one is willing to work the system to go find either their next allocation of the combination in question or go trade an allocation they have for some other combination with some other dealer that has an allocation of the one you want. Assuming that what you want is a combination that has allocations available somewhere. If a specific combination isn't scheduled for production, hence not allocated to dealers, then things get harder as nobody can get it until Honda schedules some for production and allocates them across the dealers.

I'm not and have never been an insider. But I'm on my ninth Honda product incoming, with all but three of those being cars I had to wait for. And that's how the process has been explained to me and seems to work.

Some dealers would really much rather talk you into compromising your desires and buying a car they already have on the lot.

Honda has become a software company that also sells cars. Too bad they haven't realized it yet.

I almost got talked into a metallic grey because I couldn't find a Cosmic Blue in Touring trim, but I'm glad I waited it out. I got the Cosmic Blue a few weeks ago and this week a neighbor of mine got the same car in the grey. It's not the worst but it just looks so dull and ordinary in comparison. The grey looks really nice in Honda's Photoshopped pictures where they give it a really bright, super-metallic liquid appearance but it doesn't really look like that in person.

I really wanted the Cosmic Blue until I saw it in person. I wish it looked more dark blue in general- instead is looks like an odd grey or black most of the time I saw it - and it was a sunny day when I was at the dealer. I really wanted to like it, but just didn't. I think the base color is a grey rather than a navy.

That said, it's a unique color that I can understand people loving. 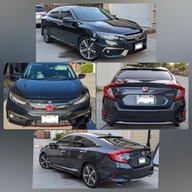 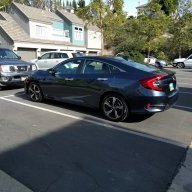 My Cosmic Blue Touring, picked her up this afternoon! 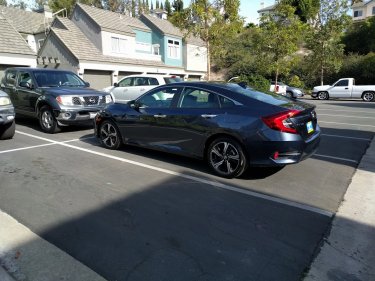 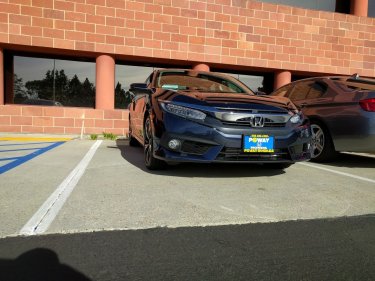 npike said:
My Cosmic Blue Touring, picked her up this afternoon! 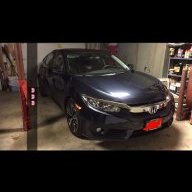 My cosmic blue civic haven't done anything to it yet but looking for interior footwell lighting! BrandonR17 said:
My cosmic blue civic haven't done anything to it yet but looking for interior lighting!