IndyHonda said:
I understand that floor mats aren't generally a deciding factor when purchasing a car, but as a new car owner, shouldn't we all expect the mats to last longer than 800 miles? I already purchased and installed some Weathertech mats and won't need front OEM mats, but that's not really my point as a consumer. The OEM mats are already worn down to the bottom of the mat after just a month! I've had older Honda OEM mats that lasted for years and other than looking somewhat dirty, they held up a heck of a lot better than these napkin-thin garbage mats that are in the Civic.

For those of you that keep the OEM mats in your car, have you had issues like this as well?

I attached a couple of photos of these mats that I took at just under 800 miles on my car. A friend of mine that was in my car thought that I had kept my mats from my previous car because these looked like garbage. Add me to the list those who are completely dissatisfied with the floor mats. At 6500 miles and 16 months, the driver side floor mat is almost completely worn through at the point where my heel sits in line with the gas pedal. This is a design defect, and should be remedied at no cost by Honda. I am not a fan of rubber or smooth plastic floor mats, and have never had them in 55 years of driving. The stock floor mats in my 1999 Accord held up for 17 years; the driver's floor mat in the Accord showed wear, but had not yet worn all the way through.
Last edited: Dec 18, 2017 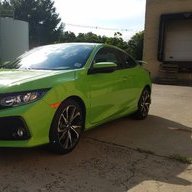 No need to overpay for long lasting floor mats. I just buy these and then swap them from vehicle to vehicle (they cost under $20). I like how they have real deep cleats that hold water, dirt, and pebbles on the mat. I typically take them out and spray them with Fantastik Heavy Duty, lightly mist with water, and then scrub with a plastic bristle scrub brush and rinse when I wash the car. The set I have in my truck I've had since 2002 and they've been through four trucks and still look new when cleaned. The set in my car has been through three cars and still look brand new. Weather Techs IMO are too expensive for what you get and I feel as much as they get praised that there's a lot of company shilling going on the internet because they aren't that great for the price IMO. My boss has them in his truck and I like my cheaper ones better (softer feel, deeper cleats, and much cheaper)

I use them all season because I'm OCD with wearing shoes on carpet. Shoes have never been worn on my carpet in my home, carpet gets real nasty when shoes are worn on it. Those rubber/plastic mats don't absorb dirt and moister like a fabric would. Even in the summer you're bound to walk on dirt or in the rain at some point. Might as well protect your carpet all the time.

But speaking of the stock mats, the Civic's are garbage. The stock carpet mats in my 2004 F150 has a very thick and luxurious feel to them (and they're very heavy). But I still use the mats pictured above to keep the carpet clean (I have them in grey for the truck to match the interior and black for the car - they also make them in clear).
Last edited: Dec 22, 2017

I had a huge tear in the drivers side floormat of my 6MT Accord Sport Sedan, from the heel of my left foot operating the clutch. The tear started being prominent within 6 months and I am a pretty light weekend only driver. As mine was a lease, the end of lease inspector came out and said “don’t worry about this, it’s 100% normal for these things to fall apart in the first year.” Needless to say for my new Si, I just swapped in mats I put on top of OE mats from the Accord.