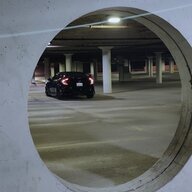 It all started when I was in high school, around grade 11. At the time, my means of transportation to school was by public transit almost on a daily basis. It was around this time that everyone was starting to obtain their learners permit for driving and I was on the same boat. I had already completed my G1 written test (Canadian license) and was taking driving lessons and using my moms car to practice. It was when I started to drive that I started to fall in love with cars. My mother had a 1997 Honda CR-V. Can't recall what trim but I remember that it wasn't the top of the line Honda at the time though. My dad was really heavy into Honda's and I guess it just got passed along to me. That car had only 173xxx kms on it when it was written off unfortunately.

It wasn't until I discovered "Need For Speed Underground 2" and the holy grail of Civic's was introduced - the '99-'00 Honda Civic Si in EBP..

When I saw this car the first time, my mouth literally dropped. I was a college student in my first semester for IT. Being a guy in technology, I was on uTorrent surfing during class one day and this game came up and I figured, might as well download it as I was in a 3 hour lecture and not even 5 minutes in. Laying my eyes on this car the first time, I already knew I had to own one. This is where it all started to snowball into an interest/ hobby. In my program, I had the opportunity to do placement work that was also paid. At the time I was driving my moms 2015 Honda CR-V when my cousin came by in his first car. Take a guess at what it was. A 1998 Honda Civic Si coupe. I was in love. Everything about the car, I absolutely adored. The body shape. The tail lights. The simplicity of the interior. I knew it was a sign for me to find, buy and own one.

Photos were taken maybe 2 months after buying the car. After a few years with the car, I eventually did the typical bolt on upgrades you can think of when it comes to mods for this platform. Air intake, muffler, coilovers, camber kits, lower control arms, front end conversion. Eventually, I was rolling looking this after 3 years of driving the car daily through rain, sun, snow, and all the gruesome weather types we get out here in Canada. Still surreal that the quarter panels were as clean as I've seen for this generation.

What's with the black fenders? You should get it painted, it'll look way better! Two tone Civic? Why?! Believe me, I've heard every single reason to get my car painted. It just wasn't on my immediate to do list because I wanted to do a swap before a whole new paint job. This brings me to 2019 and the sad, sad end to my EK.. Seeing these photos still hurt right now. I had so much planned for this car. My whole build was on paper and cash was patiently waiting..

November 19, 2019 around 7:35AM.
Heading to work on my usual route, someone rushing to work decided to would be a smart move to make a left tailing another car when the left turn is at the other end of a "lifted" intersection.

December 2019-March 2020
So, given that it was winter at the time of my accident, I figured I would just either take the bus or borrow my moms car for the time being while I look for a new car. I wasn't in a rush to buy but I was already aware of what car I wanted to get. I checked out everything I would've loved to drive from the WRX STi, Golf R, Focus RS and eventually ended up at the Honda dealership at the end of November, beginning of December. I walked in there with one thing in mind. Type R. After some research about what's going to change on the platform, I already knew I had to get my hands on it. One of buddies owns a 2017 Type R and after a basketball run one night, I had to ask to get a ride in the car. He said, "drive it bro, why ride". Well damn, hopped in the cockpit and never looked back. Everything about the interior I fell in love. It was the EBP Civic all over again.

Walked into the dealership and asked for my uncles friend who was the sales manager. Told him what I was looking for and was put on the waitlist.

Few months down the line around end of March and beginning of April 2020, phone rings and it's a call from the sales rep I had spoken with.

Rep: "Hope you're in good health to pick up your brand new Type R."

And that brings us to April 2020 after several months of waiting. What. A. Day. Proud to say that I'm a full owner of the car at my age. Anything is possible if you put your mind to it, just remember that my friends.

As of today, I'm sitting at ~5000km and every kilometer has brought a smile to my face, my mother's and my father's as well. My dad can't even drive stick but loves being in shotgun. I remember he was actually the first to sit in the driver seat and start it up. His smile says it all.

And that's how I ended up here. This car is going to be with me for the next foreseeable future and I don't plan on letting it go anytime during that. 17km on the dash when picked up the first day. Surreal.

Thanks for reading. I'll be updating this thread as I go along. It'll be a long time until I start upgrading as I'm looking to just run the car in its current state to get comfortable with what it's capable of. Considering the car I upgraded from, this alone is a massive step in terms of power lol.

Had a chance to utilize the LogR app last night and will be sharing my first impressions on that soon.

I'm not much of a vivid person when it comes to video creation but since obtaining my CTR, I've been using my camera more often. Funny enough, I had a GoPro lying around collecting dust for the longest time. Picked it up as I now have a reason to use it. I purchased it when I had my '98 Si/ EX but never got into using it cause there wasn't much to show for lol.

Recorded some roller pulls with my buddies last night. Wanted to get some clips before I start modding in the near future. Here's a short clip I put together:

While we were shooting, this silver EM2 was doing flybys the entire time; too bad we weren't looking for races as I'm sure my CTR and buddies STI would've had a party