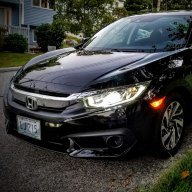 I've driven 50+ mile stretches of highways with only touching the searing wheel when it asked me to. Even though it isn't marketed for it, it drives the car fine if you know how it works.

You follow these rules and the system works great. I regularly commute to work without touching the wheel except when it beeps and it works perfect.

Curious, if you used Adaptive Cruise A LOT on commute, did it seem to lower fuel economy?

FWIW, I started using dumb cruise control lot on last tank, manually adjusting speed up / down a lot on freeway and last tank in 2005 4 cyl sedan only 22.x MPG. It's usually near 25.

cycledrum said:
Curious, if you used Adaptive Cruise A LOT on commute, did it seem to lower fuel economy?
Click to expand...

I haven't tried to figure out if it makes a difference, but I think it would probably lower MPG, for two reasons. One is there are times you can see traffic is slowing ahead that you'll let off the gas and coast, while ACC keeps the gas on until it gets close enough to the slowing cars to "see" them. In other words, it doesn't look nearly as far ahead into traffic as a driver does. The other there are times in accordion traffic (where the gaps grow and shrink over and over) where it will try to speed back up to your set point, but you as a driver would not give as much throttle because you know you'll just be slowing back down in a few seconds.

IMO it's worth buying a little extra gas, though.

josby said:
One is there are times you can see traffic is slowing ahead that you'll let off the gas and coast, while ACC keep the gas on until it gets close enough to the slowing cars to "see" them.
Click to expand...

Great observation. I've noticed this happen where I see brake lights much farther down the highway then the car in front being tracked. At that point I'll usually start to slowly reduce the ACC max speed accordingly. 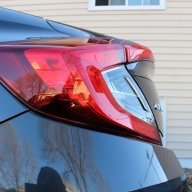 Cincysports said:
Great observation. I've noticed this happen where I see brake lights much farther down the highway then the car in front being tracked. At that point I'll usually start to slowly reduce the ACC max speed accordingly.
Click to expand...

Or just hit cancel, let it coast (or get ready to brake accordingly), and hit resume when ready. Seems easier than lowering and increasing speeds on ACC for the conditions you're discussing. based on your discussion this might help mileage too??? not sure though, will test the mileage thing next time I get a chance.

I obsess (and read lots of articles on) Self Driving tech and the Sensing tech is what let me to first look at the Civic, but in the end I didn't choose it. The reasons where primarily because of these:

2) Increased Depreciation. That 2% difference meant a lot since I'm leasing. I wound up getting an EX-T for $30 cheaper per month than an EX w/ Sensing would've been and the EX-T has a number of welcomed features. Significant.

3) Trust. I LOVE technology, but it's different when you need to rely on it to survive. My main fears were not that it wouldn't brake, but that it WOULD and would brake hard and actually cause a collision with the car behind me

4) Additional costs for Windshield or other repairs. Those sensors (the Rain Sensor too can cause a problem that Edmunds just experienced) need to be perfectly calibrated and so any problems with your windshield or such can require precision to get it working correctly and that can mean bigger $$$.

Since the Sensing Tech appears to be standard on the CRV EX+, I'm hoping to maybe see the same thing for the Civic in 2018+.

Any ideas on whether the tech gets improved or updated? I wonder if any large gains are being made or if its the same basic software that appeared in the MDX starting like 5 years ago.

ACC:
I find ACC is better for gas mileage.
With ACC, setting a one second distance makes it much smoother and more responsive than setting a longer distance. Where four bars seems herky/jerky at times, one bar seems much more natural. ACC is probably more cautious at higher distance settings. I usually go for the "one bar" distance when I am not in a traffic/merging situation.
In a really slow stop and go traffic situation, or when there is another lane merging with mine, I use "four bars" distance. People see the space in front of me and cut in, but the ACC keeps me back. The nice thing about this setup is allowing people to cut in front of me actually often relieves traffic to my sides and behind very slightly.
At the one second/bar setting, if the person in front of you slows down very quickly, the CMBS will flash and beep. The combination of ACC and CMBS pretty much ensures no collision, but it's still unnerving to have CMBS kick on when I am using ACC.
Sometimes the merging is too irregular for even the 4-second setting so I hit cancel and handle it myself. But that's where keeping an eye on the road comes into play.
Where ACC is less than ideal is when it is speeding up due to lack of traffic in front but right when it decides to accelerate someone in the next lane over makes a quick lane change in front of you. It isn't a problem unless the person is literally cutting you off because the ACC will back you off right away but it freaks my wife out because she thinks I'm driving recklessly. She has anxiety/PTSD from a car accident a few years ago. Trying to explain it to her just makes things worse.
I should also mention that while in ACC, I sometimes adjust between following distances as a result of the above.

LKAS:
When I first got the car I thought just seeing the green "LKAS" indicator meant it was activated, but then I realized I had to press the button to actually activate it.
Unfortunately one of the main freeways I drive on has really faded lines which they haven't bothered to repaint because they also have the lane divider bubbles. LKAS doesn't seem to recognize the lane divider bubbles very well, in absence of the actual line markings.
I still use LKAS, not because it steers FOR me, but because it HELPS me steer. To explain:
1. LKAS numbs the steering. The Civic has super responsive steering which neither I or my wife like too much.
2. LKAS can sudden, tight curves much easier to handle.
3. As a result of the above, LKAS reduces driver fatigue.
4. By using LKAS, I've given myself a CHANCE at escaping catastrophe in a distracted situation where I might otherwise drift between lanes.

CMBS:
CMBS was a major contributing factor in a minor accident my wife had several months ago. CMBS started beeping at her because she was creeping up too close on an F-150 truck at a stop light. She panicked and hit the gas instead of the brake. The Civic accelerated (probably assuming she was attempting to accelerate around a potential collision) and by the time CMBS realized she was accelerating straight for the truck, did not have time to prevent the collision. I am certain that CMBS ultimately reduced the severity of the collision, but that wasn't much comfort to her. Still, why didn't the CMBS check the steering position and realize the steering wheel was not at an angle that would avoid the collision? Because of this situation I think it would be better to turn off the audio alert, and instead simply provide the visual alert followed by auto braking. I imagine many other people out there might react the same way she did.
The thing about CMBS is that it is a last-second technology; it will not progress past the alert stage to the auto braking stage unless you are in the kind of situation that's going to rattle you for the rest of the day. Consequently, there is no way to "test" CMBS without tempting an accident; consequently, there is no way for the driver to build personal confidence in the CMBS system. Along with my suggestion above, I would encourage Honda to make the CMBS system customizable; alerts could be customized or even disabled, and the CMBS system could be set to react at greater distances. However the auto braking would continue to work as it does now unless the driver requests reaction at a greater distance or unless CMBS was completely turned off.
I leave it on because as long as you don't miss the brake and hit the accelerator and you aren't going an insane speed, it promises to avoid front-end collisions. Like my point #4 on LKAS, it gives me a CHANCE at escaping catastrophe.

LDW:
Basically LKAS with only warnings and no assist. Again, it gives me a CHANCE at avoiding catastrophe. Also it's cured me of my tendency to cut shoulders on certain freeway entry/exit ramps.

In summary, I've found the Sensing package helpful, and I really appreciate the lower levels of stress that result from decreased driver fatigue using ACC and LKAS. Interestingly enough, the only feature I've seriously considered turning off is CMBS. But it's the feature that promises the biggest advantage of all (in certain situations), so I leave it on.
Advertisement
You must log in or register to reply here.
Share:
Facebook Twitter Reddit Email Link