EnjoyDriving said:
What is the limit for over rev? Beyond the red mark right? Its really hard to over rev unless u totally forget to shft or down shift to a wrong gear, or felt asleep at wot?
Click to expand...

Anything over 7,000 RPM is an over-rev on our car. Unless something is broken, you *cannot* over-rev by just going WOT. You'll just bounce off the rev-limiter - the rev-limiter works by cutting gas to the engine when it senses over-rev. That immediately drops revs back to the safe zone.

The way most people over-rev on a car like the Type R is by downshifting to an inappropriate gear - a "money shift." 2nd gear maxes out at around 60mph, if you're going 70 and downshift to 2nd and let the clutch out, now the wheels are going 70 mph and the engine will try to match that speed. The rev limiter is ineffective because the wheels are driving the engine, not fuel. Cutting fuel would not do anything to stop the over-rev, as it's all mechanical.

In 2nd gear at 70, let's say the engine has to rev to 8,000 RPM. The clutch is the interface between the wheels and the engine - once it's in gear, the two must spin at the same rate. It's either the engine match the wheel speed or something breaks in the transmission. If the transmission doesn't break, then something in the engine breaks. Usually a rod. 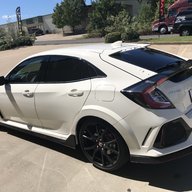 Phantisy said:
Not hard to over rev on a missed downshift.
Click to expand...

can you explain what you mean by this? The other day I did a hard pull in about 4th gear and the engine light and the rev match light came on... Are we just not allowed to come close to red lining this car without the fear of this light coming off?