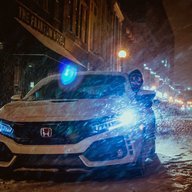 Now for the install. Im sure most places wouldnt have the issues I had but being a daily for right now until I get my sti finished and using damn salt in the winter tends to kill cars but here it is

But I will talk through the process

So cat backs are relatively straight forward to install. With this one there is 3 bolts that mount to the end of the front pipe and then 5 exhaust hangers.

So first thing we done was lift the car and place jack stands under the car. Def make sure you have something to catch the car if it happens to fall.

Once you have that done there will be 4 10mm bolts and 2 plastic push clips to remove. Push clips will be on the sides in the wheel wells. One on each side

Once the tray is hanging spray some penetrating fluid on the bolts. We done that and it worked for 2/3 bolts. The other bolt we snapped off almost flush with the flange so that only means one thing. Drill it out as our other method would not work. My buddy having a go at drilling hah as its a long process. Hardened steel takes a while. But use titanium bits for this if it happens to you. Use a small bit to start a hole so that you can use a bigger bit. Started off with 1/16 I believe and then went to a 3/8th. We completely drilled out the bolt and make sure the next one was long enough which it was.

Now for the next two. These where a bit easier. But we assumed with all the salt in out area it corroded the bolts to the back of the flange which we where right.

So to do this next part have a small propane torch and some water handy. We but a nut on backwards and put it in a few threads and then placed another nut on the right way so that it brings up on the first nut. Now this might also break the stud/bolt free. If not then heat up the bolt and then shock it with some water.

Then hammer on the outside nut and after a few hits the stud will break free. The youre done hah So when I install the downpipe ill prob be going this route so I dont snap off any bolts as it seems to happen often on the downpipes.

Next issue I ran into was not having the exhaust hangers for when I done a muffler delete I either through them out or misplaced them. So i ordered some fron Torque Performance but for right now I needed something to brace the rear hangers.

So what we done was grab some pieces of 1/8th rubber and drilled out the hanger holes and doubled up the rubber to get me by. Again all this can be watched on our youtube channel which just launched and the video will be uploaded soon. Love the exhaust so far. Its a little louder than muffler delete but its also a bit deeper so looking forward to the downpipe for sure. Youtube channel has officially launched. Hope to see some people there!