I installed Morimoto 2-stroke LED headlights this past week and here is my little mini-review. Install:
I zip tied the controllers/drivers onto the headlight support beam and just tucked the wires in. Removed the H11 bulb, and popped the LED bulbs there. Boom. Done. Overall install is significantly easier than say a true HID setup with a proper harness to the battery and using the OEM headlight harness as a source for the relay switch.

Build Impressions:
-Build quality looks great.
-Cree XHP50 LEDs, that have a capable output of 5000lumens per bulb before optic losses.
-I personally like the simplicity of the install. PnP!
-The integrated fan is relatively quiet and only noticeable when the engine is not running. A/C fan does give it a run for the money though.
-Controller/driver is a bit bigger than the heatsink cable fin type LED bulbs but for our hondas, there is plenty of room for the controller. If it was for a LED bulb within an enclosed housing, I would be a little worried about cramming that thing in there.
-3 yr warranty!

Output Impressions:
-As many mentioned, the foreground is very bright. About 4-5 car lengths out, the LED output starts to taper off where HID would still shine.
-Side coverage relatively adequate but not the best.
-The color is spot on with the DRL.
-A cutoff is still present and there is minimal glare to oncoming cars. Okay in my book!

Final Overall Impression:
Great buy for $120. The 3-year warranty is nice, the simplicity of installing them, as well as the output. It definitely has improved since I last attempted to use aftermarket LED bulbs in 2013. Would I do it again? Probably. Will I plan to upgrade in a few years as the LED market matures? Probably again. Research on the Honda LED factory fogs that are available for Civic RS, UK Hatches, Civic Type R. I'll probably buy a set to install if the price isn't absurd.

Some fumbduck smacked my parked car last night at 2:20am. The mirror is pretty much toast. I'm checking with my insurance agent to see if this is covered under comprehensive coverage. If not, it's going to cost me about $250 for the parts + the paint protection film installation on the mirror skull cap. 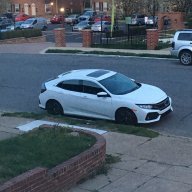 That sucks bro . Had that happen on my last car 2015 Fiesta ST. I was fortunate that the glass didn't shatter but the pieces were on the ground and I had tighten the mirror .
OP

WhiteHatchEX17 said:
That sucks bro . Had that happen on my last car 2015 Fiesta ST. I was fortunate that the glass didn't shatter but the pieces were on the ground and I had tighten the mirror .
Click to expand... Yea. I found most of the pieces on the floor, and I managed to put most of it back together while my new mirror assembly and skull cap get shipped. Local dealerships wanted $320 for the parts, it was $245shipped from Hondapartsunlimited.

Hi all, I'm still waiting on my mirror assembly.

HPU partially refunded my money because the assembly was on national back order. I called HPU stating I still need this piece regardless so why don't you hold my order and ship everything when the other part gets here. The guy I spoke to on the phone didn't do internet orders so he said he would tell the person to hold my order and wait. A few hours later, I get an email saying my skull cap and clips have a tracking number created. Seriously!? I emailed them asking what is going on since I specifically called to say hold it all till the parts get here. HPU calls me up stating they have too many backorders and they will not add mine to the list. I said I wanted a full refund because if you won't hold my order why should I order from you? Unfortunately, the shipment already went out and now it became an RMA. I told them forget the RMA and I'll just take the parts.

After that stupid hassle, I turned to another internet dealer "Majestic Honda" and ordered the part. They emailed me after I placed my order to ask if I wanted to cancel my order or wait for the part to be available. That is how you do it! You ask the customer not freaking just partial refund and ship the rest of the crap out!

TL;DR
Hondapartsunlimited wouldn't keep my order in process for a back order part and shipped out my other crap without really giving me the option to refund the whole order or waiting. Ordered from Majestic instead.


Mirror assembly ETA was 5/5 but I didn't get a tracking number. Will check with them tomorrow. I'm tired of driving this hooptie with a broken ass mirror. LOL

I'm about 4500 miles logged on my car since I took delivery it in March.

After a little fun, I started to get use to the way the power is delivered to the CVT. I started to play the MPG game with my brother and this week, traffic has been light. The matte screen apparently scratches easily. In order to reduce that issue, I ended buying photodon.com's screen protector in matte finish. I was impressed with the packaging, wipe, test sample, etc. I will buy again from them whenever I need one again! My mirror assembly finally arrived at Majestic Honda and will be shipped off to me tomorrow. Hopefully it will be here by next week and I can take care of it.
Last edited: May 9, 2017

derbo904 said:
The civic hatch rear light doesn't have an on switch like the CRV/MDX/HRV, etc. The housing is the same housing since the early 2003 and like my brother's old 2008 fit, I plan to replace it with the CRV's switched housing. You get these in yet? How difficult was the install? Also, do you have part numbers for everything needed to install the Honda ASEAN Clear Side Markers?

Synomenon said:
You get these in yet? How difficult was the install? Also, do you have part numbers for everything needed to install the Honda ASEAN Clear Side Markers?


I haven't ordered this part yet. The install should be literally removing the old one and replacing it. Note about the sidemarkers:
As mentioned numerous times on this forum, you need to do modifications to get the correct socket in there. You can search the DIY sidemarker thread in the DIY forum section.

Minor Update:
After about 2 weeks, Honda finally has the driver side mirror assembly in stock. I finally got all the parts to replace my broken-ass mirror.

Install:
The interior door panel was very easy to remove and it took less than 30minutes to install. I bought a fair share of interior green clips in case I damage some while removing the door panel. Sure enough, I did damage 2 of them as I removed the door panel. Also, my original skull cap has some damage on the inside clips but it was minimal enough that I opt to install it back with the new mirror assembly. The new painted skull cap I ordered will be a spare should I ever need to use it again.

I'm researching a few items on honda parts catalogs and hoping when the CTR is out, I can dig a little more.

-Rear Sway bar (CTR if it fits, Si should fit but it's only 18mm vs 16.5mm)
-LED OE Fogs (CTR)
-Horn Hi (Si has a dual horn setup, while the hatches/regu have single "low" horn)
-Glovebox light (Euro hatches have this, this will be a hard one to look for)
-Rear Fog Light (This will be a large project cause it requires, combo switch, rear tail lights + wiring)

Latest pic of the car. Nothing too special but it sure looks way better without that stupid chrome on the non-Sports. derbo904 said:
-Horn Hi (Si has a dual horn setup, while the hatches/regu have single "low" horn)
-Glovebox light (Euro hatches have this, this will be a hard one to look for)
Click to expand...

Glad you got the mirror fixed. Good luck with the next set of mods. The single tone horn right now sounds so cheesey!
OP

I installed Waze on the headunit yesterday with large help from the community here and on XDA. Voice search doesn't work, it requires WiFi, and it is a little sluggish. With some time, I think the community can come up with a simplier solution. @mikealanni already installed su into the system so hopefully that allows adb installs instead of USB installs.


Thanks to @Deep for posting and others for progressing the process!

I ordered a CTR rear anti-sway bar and D brackets, but the bar is backordered from Honda with no ETA. Waiting to see when that will arrive..

#Oil Change @ 15k
I did my 15k oil change this past weekend. I've set myself to a 5k interval for my oil changes and decided to buy a fumoto oil valve instead of a drain bolt. Installation was straightforward and also had a nice lock piece to prevent it from unlocking itself. I will not know how well this will be until next oil change about 1.5 months from now. My CTR Anti-Sway bar came in. I'm a bit slammed for a few weekends so I won't be able to install it for awhile.