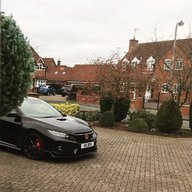 
Just thought i would finally introduce myself as ive been lurking on here for a few months now.


After initially not being sold on the FK8 when i first saw the press photos i really fell in love with it when I saw the pictures Kamispeed posted up of a Black FK8 wearing some rather lovely wedssport wheels, at this point i was sold. Then the hunt began for a CBP type r, this proved a lot harder than I had initially anticipated, with the market being flooded with red and white ones i was starting to think i wasn't going to be able to find the right black one within my budget. The one Wednesday afternoon whilst at work my phone pinged *Autotrader - New Vehicle listed matching your criteria* after already broadening my search to include all colours I thought it was going to be another notification for another red one listed for sale. But to my surprise it was 99% exactly what I was after with the only exception being it was a 4 hour round trip away, a little more mile’s than I initially wanted (14k, I wanted sub 10k) but it’s a weekend / track car and was a little under my budget so I wasn’t to fussed, as another bonus it was from a Honda main dealer.


Fast forward 10 days and here’s a picture of me picking it up. Plans moving forward are to mildly modify it making it more capable on track but keeping the on road compliance so I can still use it as a weekend / family car as well.


I currently have a few bits in the garage waiting to be fitted ahead of my first track outing on the 15th April.


Future plans include:
Eibach or Whiteline anti roll bars – still undecided which ones to go for
Oil Cooler – Probably greddy or may make a custom one
Exhaust – Either HKS Legamax or Remark Spec I
Intercooler – HKS
2 Piece front discs – Girodisc or the new project MU ones 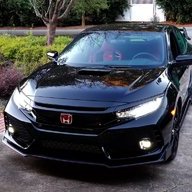 Congrats on the purchase and the "right" color choice. I hope the FK8 delivers at least as much as your previous cars. So jealous that you Brits have had access to the previous Type Rs.
OP

Type Rocket said:
Congrats on the purchase and the "right" color choice. I hope the FK8 delivers at least as much as your previous cars. So jealous that you Brits have had access to the previous Type Rs.
Click to expand...

Thanks, i think its the right colour too just a bit of a pickle to keep clean. So far on the road it definitely out performs my older civics. The big test will be on the 15th April its first track day. I've never really understood why you don't have access to the previous models and why the FK8's have so many differences as well.
Instagram - R5_DPX
Advertisement
You must log in or register to reply here.
Share:
Facebook Twitter Reddit Email Link