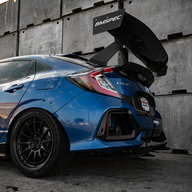 Gearing up for a proper send-off now. DIY'd a cold air intake for the stock airbox: final numbers are impressive, IAT1 sits 4-6 deg F above ambient, and IAT2 about 8-11 deg, as long as I have no traffic in front of me. Literally made out of scrap plastic and dryer hose lol. The original air filter remains, along with the original upper half of the airbox and stock MAF. This is the first time I own a turbo car, call me a noob, but I'm shocked how much butt-dyno difference you feel just feeding the engine 30F cooler air.

The dryer hose is zip-tied to the IC piping, sandwiched between the frame and the factory undertray, and drops back out the front of the car like so. Conveniently, one of my splitter rods lines up with the fog light hole, so I just stuck it through the hose and tied that all together. Duct tape for reinforcement! Onto the next item, MAPerformance sent us a prototype oil cooler a long time ago and asked us to help evaluate it. My apologies for taking forever, but it's in, it fits, and it might work a little too well without a thermostat. I actually can't get the oil temps to go above 183F right now lol, and that's aggressive driving in hot weather in traffic. I don't think I'll have any trouble keeping oil below 230F on the track, but we will find out. It is a TIGHT fit between the PRL FMIC and the lines, but it manages to squeeze in there. I need to check next week that the lines haven't started rubbing through or anything as this is a legitimate worry. The oil filter adapter/housing is an interesting design, it avoids a lot of clearance issues that sandwich plates create but now you have extra seals, each one a potential leak point. Still have mild oil wetting of all these parts, but no real leaks worth mentioning so good job MAP. The 1/8" NPT sensor bung is a little inconveniently located, so I couldn't put a pressure sender on it, only temperature. You can also tell that there are three AN lines converging on the oil filter housing: Supply, return, and... wtf? I'll get back to that in a minute.

Temp sensor was relatively simple to hook up, just DIY'd a 4-wire harness to the sender (above), the engine block (ground), an accessory fuse and a low-beam fuse. Ideally I'd rather have it dim with the instrument cluster, but since new Hondas dim the cluster based on an ambient light sensor, I didn't have an easy tap to use. Oh well. Looks nice, integrates subtly and no need for an A-pillar arrangement. Also bent up some brackets at this time to angle the K-Tuner towards me. Didn't really feel like using a low-quality Chinese headunit nor the factory Android headunit (slow) so this solution will have to do. So about that 3rd line coming off the oil filter housing... Accusumps are fantastic pieces of kit. Basically, it just stores oil volume/pressure such that if your engine ever loses oil pressure, it will buy you a few seconds of extra time to either a) pull yourself out of the corner and onto the straight or b) shut off the engine so that you don't damage it. Problem is, the 10th gen engine bay is quite tight and there's no easy way to fit something roughly the size of two Subway footlongs.

So that's why you see so many fittings on fittings - after measuring everything out, notching and trimming several brackets, and spending a week mocking up the setup, we have been able to tuck the Accusump between the stock airbox and the clutch master cylinder's hardline. Kinda proud of this, but I am absolutely never doing it again. One more AN line is missing from this picture, that connects the end of the valve back to the oil filter housing pictured earlier. You can see more ghetto-fab(ulous) metal work to make everything fit, the battery box and Accusump mount actually all sit on the original battery tray so it can still be removed like an OEM assembly. The Accusump mount is cushioned, multi-layer plastic and metal so as not to hurt the tank -- and this is needed because the tank is literally sandwiched between the trans mount, the battery, the strut tower, and the clutch master cylinder. Tread softly. Strapped in, OEM airbox reinstalled, I know a picture doesn't really show this well but we have a few mm left. The oil line rides right next to the CAI dryer hose and misses the trans by about 1/2". Stick a PC680 battery into the battery box, made one last brace supporting the battery to the strut tower, relocated one ground strap (was able to use factory battery cables still) and good to go! Maintaining the Accusump is a pain with the way we've mounted it (there's an air valve all the way in the back) but we've designed some "give" into the lines so the tank can be tilted up without disconnecting stuff.

Now charged full of oil. Between the MAPerformance/Setrab cooler and the 2qt Accusump, the oil capacity has gone from 3.7qt to just about 8qt total - more than double. This will buy us a ton of time before the oil overheats, if it ever even does it again! Lastly, since my dumbass removed all the tow points from the car in the name of weight and aero, we had to put at least one back in to be allowed on track. Drilled through the underside of the crash bar and secured the strap with a bunch of FAT washers and a lug nut. Not proud, but it works. With the car fully prepared now, we actually washed it for once I had a light ceramic coat applied to it earlier this year... while it seems to have disappeared, the body still looks nice when cleaned. If you'd like to see this car in action, we are going to Buttonwillow on November 8! Jackie Ding (Mr. Full Sen-Ding) and I will be doing our best to set a benchmark lap time for the 10th gen Civic community. I have been held at gunpoint to figure out how to Facebook Live our day, so even if you're not in California you can watch and participate. Join us! 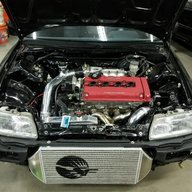 Saw the car in Jackie video's, looks great! Keep up the amazing work pushing the limits of the 10th gen Si 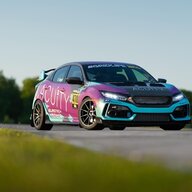 Always good to see you still tinkering even after the closing of the store!!

Would like to hear more about your oil cooler setup soon...
OP

Cons: MAPerformance didn't have the space to fit an extra thermostat/bypass into the kit, so there's no temperature regulation and you need to drive the car HARD to get the oil above 212F.

Pros: Otherwise, the MAP lines and Setrab core do their job well, and I can do 12+ hot laps in a row with the oil never going above 250F. As a racecar part, I couldn't be happier with the setup. For the street, I just think it needs a 212F thermostat.

In case you were curious, the Accusump was needed as well, big time - after every track session we discovered that it was nearly empty (30psi remaining in tank, starts at 80psi fully charged)! But CH2 not only survived the outing, it laid down one of the fastest "CTR" lap times ever at Buttonwillow with a 150whp disadvantage. Not too much story to tell about our Friday at 13CW, but basically we discovered that the rear suspension generates too much grip with new A052's and our double-gurney setup is really effective lol. Definitely could have reduced rear tire or downforce to gain straight-line acceleration. We spent the day dialing in the front end, using a combo of tire pressure changes and sway bar adjustments (full stiff now on the Eibach): After settling on 28psi hot for the front tires, the car wasn't washing out anymore on power, so we had more grip than power and just had to send it. DRob had sent us an E30 tune to keep the car cool on track, and it did its job beautifully - power on a hot track isn't the same as when you do pulls at night, but that's physics. Since I was driving, I didn't bring my camera but fortunately Victor Giang (@victorgiang on IG) was pitted next to us and snapped some bangers! 
And with that, I'm calling this project complete! While I won't personally be taking down the CTR record, CH2's basic build spec (stock engine + turbo, basic coilovers, basic aero + good tires) makes a strong case that any Civic Si could perform at CTR levels with just basic bolt-ons, a little weight reduction, and an Accusump. That's a big enough achievement for me.

Who wants a fully dialed-in Time Attack car with stock parts and spares for $28k?
Advertisement