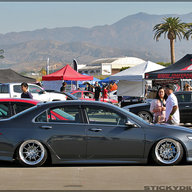 Figured I would start a build thread + IG build profile specifically for my newly acquired CTR.
Just a little backstory, the name of the build is inspired by my 04 AP2 which happens to rock a SD619 plate on it. I wanted to keep the tradition going so I placed a custom plate order through the CA DMV for SD619R!

I acquired the CTR on May 11, 2018. Since selling my E90 M3 at the end of 2016, I have been hunting for another 4dr sports car. Funny thing is, I was all lined up to buy an ISF. My wife and I randomly decided to call around to a couple Honda dealers in town to see what they were asking for their CTR's. Each dealer shot me different RIDICULOUS prices (49k, some said 51k). The last dealer we called was Ball Honda, who agree to sell me a 2018 ABM at MSRP +2.5k ADM. On top of that, we received a military discount, knocking off another $500!

Enough talking, onto the pictures! At South OC Cars & Coffee the next morning! And of course, pictures of my previous build and the S2000