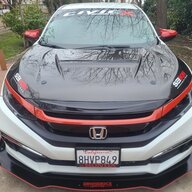 BomberSI said:
5/5/19
Well the car is finally back to perfection! I picked it up on Tuesday April 30th but wasn't able to post until today. While the car was in for repair I had the wheels Powder-coated by static coatings in Clifton. The Aodhan AH07 are now redone in Prismatic powders Misty Midnight with a matte clear. Now about the car... the entire quarter panel was replaced along with the under support, it took a little over 2 weeks but was well worth the wait. I couldn't have asked for better work and customer service from AutoBody 4 U in Clifton NJ. Luckily I wasn't paying but the total cost for body repairs came out to $5,580.00!!! But what ever Im just glad to have her back!! Once I got the car back I put the red badges on, black door handle covers, red H wheel center caps, and some classic Honda stickers on the fenders! Allin all i think she is looking great! May go lower tho, still feel like the wheel gap is pretty bad! Did you put your own badges on those rims 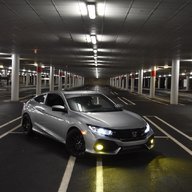 [email protected] said:
Did you put your own badges on those rims
Click to expand...

They are the oem caps. They fit but have to be pushed a little hard. But they come out and stay solid in there. the "H" can be removed for paint to.
OP

Long time no post. Today I installed the @HybridRacing short shifter, its my first mod in over a year and a half. For the 3 of you that follow me and my build and are wondering where I have been.... I opened a barbershop in Englewood NJ. Its called Virile and its a true classy gentleman's barbershop. but I had to put the civic on hold for a little while with all that going on. But now Im slowly coming back to it in stages. Not making a whole lot of money yet but I am finally able to get one or two things here and there. The install was a piece of cake, only problem I had was I some how was missing the bolt that tightened the angle the shifter arm sits at. I just ran to home depot and got a stainless steel bolt of the same thread pitch of the one that tightens the height of the shifter, once that was all said and done I was ready to roll. And DAMNNNNN the battery died on me while doing the shifter, forgot the damn dome light on.... But once I jumped it and took it for a ride all I could say was holy S##T this thing is amazing! The quality was there from the jump out of the box and I know from past experience their products have extensive R&D behind it. The shifts are crisp and firm and the throw feels the full 30% shorter if not more! I would highly recommend this to anyone who wants to shorten and tighten shifts while getting rid of the play in gear. Not really sure it could get much better then this! sorry I forgot to take pics before I put the console back in but I promise its in there lol. my plans for the future as of right now is to (clean up) the car as it was kinda neglected during the business opening and covid. I want to change the shift boot and knob, replace the emblems as they are now faded, replace the grill cause it cracked, and fix my front drivers seat as it now has a hole in it . And get a professional detail... having a dog has just made everything worse lol! There are a few more mods ahead hopefully soon including new wheels and exhaust but no promises it will be quick! 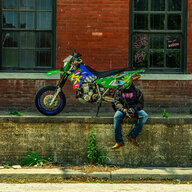 rhino said:
clean looking car man and i gotta say the letters on the outside of the tire looks nice not something i thought i would actually like
Click to expand...

Thanks man! Yea the tire letters are love or hate. I go back and forth with them. Had them on my 1998 integra so I had to do it to the Si! BomberSI said:
Thanks man! Yea the tire letters are love or hate. I go back and forth with them. Had them on my 1998 integra so I had to do it to the Si!