Any San Diego Civic owners out there?

I'm looking to purchase an Ex-T soon. Are there any San Diego civic owners that can give me tips on purchasing/recommend me a dealership with a good price?

How do you like your new civics? Have you had any infotainment issues?

I'd like to hear everyone's feedback and insight please. Help make this decision easier for me. I really love the new civics (the look, engine, technology etc.), but I really don't want to end up dealing with a ton of issues like everyone/purchase a lemon. This will be my first ever car and i'm just trying to make the smart choice. I've been looking at the 2016 Mazda 6 as well but the civic is still calling me lol. Please help! Thank you

Drove off the dealership lot on Saturday night after hours of haggling. Intended to buy the base LX Sedan as a daily driver but the wife liked the bigger touch screen, connectivity, moonroof and extras on the EX so we got that instead for $20 more per month. Loving it so far!
Veni, Vidi, Vince's Civic

DCH Honda for my Touring sedan purchase with Costco Auto Program, no surprises with the price. DCH has great customer service. Recommended.

FYI, the Touring has a lot infotainment bugs that Honda is still "working on a software fix", and their there's the sub-woofer rattle issue, which after three repair attempts seems to be fixed. 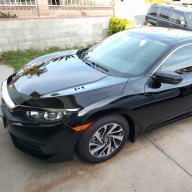 So far I'm happy with my Civic, to be honest I hardly drive much I've only put on about 6,000 miles in about 10 months of ownership. Just had the standard recall work done on EX (piston snap ring recall and the VSA update). I initially had some bugs with Android Auto on my old LG, but when I upgraded to the Nexus 6P I've had no issues whatsoever. When you test drive just make sure to play with everything before you commit.

I went to Mossy Honda in Lemon Grove. They were great. I did all my negotiating via email. When I agreed on the price I just had go there to sign the paperwork, drop off the check, and pick up the car. Took like an hour max. I recommended a co-worker to them also and she got a good deal on an 2016 Civic LX.

What I really like about them is their service department. When I got the recall work done for the misset piston snap ring inspection. They took the time to check my car for leaks and made sure the Honda bond was put on correctly. They refused to release the car to me till they were absolutely sure it was good to go. When I got the VSA update done last week. I made an appointment through their online system. When I showed up on a Saturday for my appt. it was packed. But they still managed to get my car done in about half an hour. The service alone is really good

@dgarcia619 where'd you get your tint done on your EX? looks nice

seanphenomenon said:
@dgarcia619 where'd you get your tint done on your EX? looks nice
Click to expand...

Thanks. I went to Hot Spot Window tinting in Chula Vista. I paid around $150 if I remember correctly for all 5 windows.

Anyone know any auto appraisers in san diego?

Any Good LED retailers in San Diego that do installation?