Hey everyone! I just picked up my first Honda and my first NEW car. I wasn't excited about the circumstances that led me to it, but I'm very happy to have it.

I was in a car accident with my Grand Prix - loved that thing, super reliable and super comfortable. I always meant to do some things to it but never got around to actually spending the money.
Searched for a daily driver for awhile while my broken collarbone healed, then I found a 2004 Jetta GLI. 3k miles after buying it, the timing belt went, bringing down all 20 valves in the process. I got to learn how to rebuild the head of an OHC engine, which was pretty cool. Since then, it's been the victim of a mild hit and run, it's got dead cats - thank goodness Minnesota doesn't test :S - needs suspension all around, wheel bearings, it's been through 3 new ignition coils... as soon as I cross something off the list, two more items appear.

So keeping in mind I'm getting married later this summer, which has me thinking practically (eww), I decided I needed something long term. And since the Jetta is worth about 2 grand at this point, it had to be the FR-S to go. It just hit me yesterday when the dealership put it out on their lot that it's not mine anymore. You can't really explain it to people who don't care about cars, but I can't drive by the Honda dealership until it sells, and I hope it sells to someone from a hundred miles away. 2017 Civic LX in Modern Steel, 6MT. I love this thing. So smooth, super nimble, light on its feet - almost exactly the same weight as the FR-S - incredible on gas, and it doesn't get that much attention from boy racers... both the FR-S and the GLI bring them out. Dropped the Jetta from my insurance while I decide what to do with it, so I'm saving plenty of money insuring a single newer car. And I got to fill up on 87 for the first time in a year and a half. 91 octane adds up after awhile!

I don't know about my plans for it. I want to wake up the sound system a little bit, and I've got a single 12" in a sealed box. Get an LOC, should be a super easy job to wire up.

Lower it a bit. I was thinking Eibach Pro kit, but after seeing pictures of it, I'd want more, so maybe Sportlines. Though I want to improve its handling, not JUST for looks, although I want this thing looking classy.

Other than that, I'm lost. This is my first Honda. Plz hlp.

If you read to here, ...why? Thanks for stopping by, say hi, and I'm super excited to be part of the community! 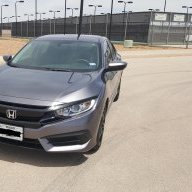 Welcome! I have the exact car but 2016 and I love it. I actually think the hubcaps don't look bad I like the way they look but eventually I changed them on my LX for alloys. I've messed around with the audio a lot and replaced the speakers, head unit and added amps and a sub to the car and now it sounds great if you need any info just let me know. 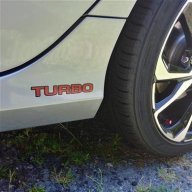 repeet said:
Congratulations, that's a beautiful car. I'm curious about how it compares to the FR-S.
Click to expand...

Thank you very much! I'm happy with it!

I think once I've put a couple thousand miles on it, I'll write up a comparison and put it in the Civic vs. forum.
So far though, I'm pleasantly surprised. The civic, weirdly enough, is the lighter car. It's nearly as flat and composed around fast corners... And it's even better on gas! Always a plus hehe. I don't know about quickness yet, as I'm still in the break in period. I'll keep you posted once I can get it above 4k!
OP

Space Lord said:
Welcome! I have the exact car but 2016 and I love it. I actually think the hubcaps don't look bad I like the way they look but eventually I changed them on my LX for alloys. I've messed around with the audio a lot and replaced the speakers, head unit and added amps and a sub to the car and now it sounds great if you need any info just let me know.
Click to expand...

I appreciate it VERY much, and I'll definitely be hitting you up in the near future! 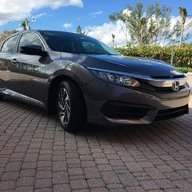 Congrats! Definitely looking forward to any mods you add to it.
OP Put the sub in today. Alpine type S driven by a pioneer mono amp for up to 500W rms. Wiring was easy enough once I decided where to put it. Routed the power wire through the same hole as the hood release. Don't expect to get anything bigger than about 8 gauge through there if you don't want to replace the grommet. It would be simple enough to expand the hole, but I don't think I'll ever need to. The 4 gauge I put through it should be enough for anything I'd want to do. LOC to the left rear speaker, drilled into the vertical portion of the rear deck for a ground.

Car audio has always seemed so daunting to me. Did a little bit with the grand prix, nothing with the jetta as I don't wanna mess with the monsoon amp.
But it turns out with this, it seems super difficult until you just jump in. I'm happy with the sound, not super jazzed to give up that much trunk space. So this is a temporary setup before I put something more permanent in the corner of the trunk.

Haven't checked in in a bit. Got married, went on a honeymoon, now I'm back!
There are now 3500 miles on the civic. Lifetime average of 38.5 mpg, verified by Fuel Buddy. Every other car I've had has been pretty generous with the gas mileage calculator, but this one is spot on. With eco mode on, lowering shift points and dulling throttle response, I can get as much as ~46 on a tank with my long drives to work. Super happy with that.
Very comfortable ride, though my recent standards are an FR-S and an 04 GLi. The clutch is so light, really odd feeling after the jetta. Where the jetta has a heavy, wide bite point, the civic is much finer and lighter. It can be tough finding where it bites if you weren't paying attention at a stoplight. My (now) wife's accord is the exact same way, so it could be a Honda trait.
One thing I hate: I always took it for granted and assumed it was a standard feature for all new cars, but the civic LX doesn't have variable speed intermittent wipers. Single speed. I found it out like a full month into ownership. It's actually incredibly irritating.
All in all, I'm loving the car though. It looks so sharp, but it doesn't turn heads like the frs did, kind of nice not to be stared at constantly. It's not the quickest, my jetta would beat the crap out of it, but it's an engaging drive. I'm getting a nice little list built of what I want to do to it!
You must log in or register to reply here.
Share:
Facebook Twitter Reddit Email Link