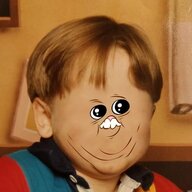 I plan on getting underneath the car tomorrow but wanted to see if any of you had some pointers on where to start. The noises location seems to be in the front driver's side area, behind the dash maybe in the engine bay. Could just sound that way since I'm sitting there. To make this rattle I have to be at a complete stop or very low speed, less than 15mph, then press on the accelerator. It will not not make noise when above that speed. Now I can replicate the noise when I press on the brake and light press the accelerator. I did this for the video I'm posting of the rattle. Since I made the video I also learned that when the heat is on is makes a lighter more inconsistent version of the rattle, sounds to be coming from same spot.

Thanks for any insight!

Try this!!! Remove be the lower duct on the drivers side. There’s a philips screw holing on a cover plate that has to come off to remove the duct. Disconnect the hose and find the second philips head screw on the black cover plate. Now the plate can be removed. Behind it are two metal tubes running into the heater. Put some material behind the metal tubes and leave the cover off and drive around.....let me know what you find. May be very pleased. May not be. I let the cover off and and so far....so far optimistic the I have resolved my dash rattle issue
Lol
Last edited: Mar 27, 2021
You must log in or register to reply here.
Share:
Facebook Twitter Reddit Email Link