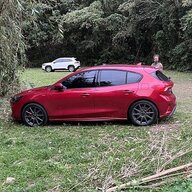 +1 it's funny, people how like the hatch prefer lighter colors, those who hate the car prefer black. 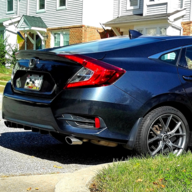 I'm not so sure that's true about the black versus lighter colors. Sure the vents are less noticeable in black but I also think the way the black looks in the front with the black grille has an almost menacing look, which is cool. Actually, having seen all the colors, the hatch looks good in every one.
Add your car to the Tuned CivicX Experience & Reliability Thread

For me it depends on the color. On black I don't even notice them at all, on red or blue I like the way they contrast with the color, on white or silver I agree they sort of stick out. But even on the colors that they stick out to me it isn't really an issue. Pretty much every single car on the market has some styling feature I don't like anyway, and how often am I going to stare at the rear of my own car? Overall I love the styling, I love the way it drives, and I need the functionality.

The Honda dealer in Springfield,PA (piazzahonda) lists that they have a gray Sport CVT in stock. Anyone in the area, confirm and take pics if you can. I have a Sport Hatchback on order, was supposed to be built 9-8, latest info shows won't be at dealership until late November or early Dec. Bummed, was hoping to get this month.

I think the dealers listing Sports in their inventory haven't actually received them. A local dealer in my area showed one on their website but it was nowhere to be seen on their lot. I have a feeling we won't be seeing these til later in the year.
Add your car to the Tuned CivicX Experience & Reliability Thread

Agreed! I'm also getting tired of people complaining about the vents. Since I've been car shopping I've been paying a lot more attention to the cars I see on the roads and there are some really overly done vents out there, the hatch doesn't come close to many of them. I am leaning towards the black with the two tone int. I test drove one the other day and that combo is stunning! I typically hate black cars, but that combo...perfect! I admit I started considering that color because of the grills but I think it was from listening to everyone on here making me feel like they were seeing something I wasn't. Now...that chrome over the door being the only chrome looks crazy off to me...but that can be changed 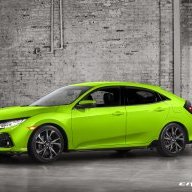 gtman said:
I think the dealers listing Sports in their inventory haven't actually received them. A local dealer in my area showed one on their website but it was nowhere to be seen on their lot. I have a feeling we won't be seeing these til later in the year.
Click to expand...

Not sure if you're referring to 6mt or cvt.
I drove a cvt Sport today.
Posted a few pic's. 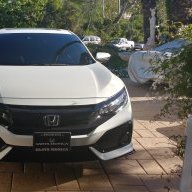 The large vents may be offputting but that doesnt mean its to the extent that its a deal killer.

Im in the perspective with Mjyumping where a darker colored car would hide, or blend more with the dark vents as soften the visual effect of vents. Like it or not, you cant deny the vents are going to be a polarizing design choice.

Theres a newish thead posted not long ago, with pics on the civic sport hatch being released with the dark steel metallic color. To me, that produces the desirable effect where the vents don't pop out quite as much. The car, to me, has a more graceful presence in that color, as well as black and blue. 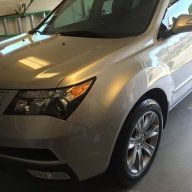 Polarizing, I love it and the BIG BLACK VENTS! Let me POLARIZE YOU with my new Civic HB! Lol 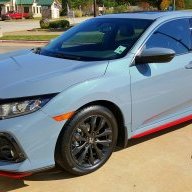 Man that looks sharp, the red really sets off the sonic gray color. The wheels are much better looking than the stock wheels, too.

Bought the Sonic Grey EX CVT on Monday! I am personally in love with this hatchback design and the color when I first seen the concept months back. Ultimately, I am very grateful that I didnt buy white, black or silver.... played out and boring once you physically see it in person. I really enjoyed the look of the coupe, but its not the hatch. My girlfriend loves the coupe because it reminds her of a her old mitsubishi eclipse and her recent scion tc Frankensteined together. lets just leave it at that.

joedog said:
Man that looks sharp, the red really sets off the sonic gray color. The wheels are much better looking than the stock wheels, too.
Click to expand...

looks like the oem splitter package (without spolier) retails around $1500. tempting, but im not sure if im feeling it or i just want to buy something

WOULD YOU SAY THESE PICTURES ARE A GOOD REPRESENTATION OF THE COLOR IN PERSON? 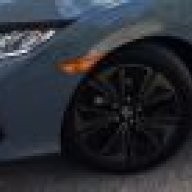 In most lights this color just looks gray with a hint of blue. It's a strange color to pin down on how it looks because of that. The pearl doesn't show up unless there is direct light or sunlight on it and you have to close to the car to see it. Some of the shots in this vid you can see flashes of the pearl. The pearl also has a slight bit of green in it.
Advertisement
You must log in or register to reply here.
Share:
Facebook Twitter Reddit Email Link

So the Accord now comes in Sonic Gray Pearl
2