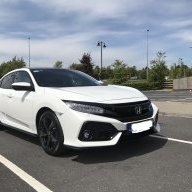 I have just traded in my Mazda 3 manual (pre 2017 refresh model) for the new, white Civic hatchback manual. Mazda was diesel, Honda is petrol, here are my findings:

Of course this will be my subjective opinion, but here goes. Civic looks more aggressive, and seems to be "bigger". Mazda was sedan and civic is hatch, however from front, sides and rear, Honda looks more massive and "heavier". Mazda seems more rounded and curvy, more "mature". I don't have a preference, really, liked the look of them both.

Honda looks cheaper inside than Mazda. Aside from the fact that I had leather in Mazda and no leather in Honda, the plastics on the dash look definitely of lesser quality and worse feel. Interior of Honda looks nice and is pleasant, but in Mazda there was more "luxurious" perception of the quality of plastics.
Visually, there seems to be more space inside for the driver, in Honda. Mazda seemed to be a snug fit for the driver, whereas Honda gives more space for arms and legs. Especially for legs, Mazda had a unpleasant center tunnel which was very wide and giving less space for the "inside" leg. Mazda is much less practical, much less space on the door shelves (only for bottles) as well as in center console.
Mazda felt inside more like a sporty/"luxurious" small sedan, where as Honda feels like a bit like high tech/utility/practical vehicle.
Too early too tell how are the civic's seats, however those in Mazda were super comfortable!
Not sure how space in the back compares, however space in the trunk is different league. Honda has much more space in the trunk and because it is a hatch - the space is more practical. I can even fit a spare wheel inside ("tight fit" because of exhaust but doable).

Honda's infotainment system is much more advanced. It has Android Auto and Apple Carplay - Mazda does not. Honda's navigation system is a bit more advanced and offers more options as well as POI's. Honda has much more security gadgets, where as Mazda (even the refreshed model) has less. No lane departure/assist on Mazda, my Mazda also had no traffic sign recognition, no advanced cruise control with auto braking and keeping distance, no emergency brake/warning. Safety a big plus for Honda, small plus for maps and support for Android/Apple.
I am not a big music listener but I noticed, that Bluetooth calls sound worse on Honda and I think Honda might have inferior speakers. Mazda had Bose and I really doubt Honda has anything close to that. Small minus to Honda.

2.2 Diesel vs 1.5 petrol. Totally two different worlds. Much more torque on Mazda but surprisingly, Honda's engine feels very potent on 1.5-2.5k area, where I used to drive on my diesel. It is not as responsive in this range as Mazda, however you can really start overtaking in given rpm range.
On paper, Honda should be a bit faster in acceleration, however "practical" power is more easily accessible on the diesel and the torque does really allow for overtaking at 50-60 mph on 6th gear.
Gearbox is much more precise on Honda, as well as shorter motion is needed to change gear. Mazda had a little "crunch" on 2nd gear from new and seemed less sporty than Honda's gearbox.
I am still breaking-in Honda so I don't use full rpm spectrum of this engine yet, but so far I am happy with the small petrol 1.5.
Time will tell how fuel consumption goes, however since new, while breaking in (using full rpm range between 1-4k, while loading the engine on different gears), by no means driving economically, I had an average today of 7l/100km. Not bad at all if you ask me, I am sure it will improve with time and once I put in the full synthetic. I am also using fuel additive from new, but this probably does not make a huge difference in mpg.

More cars are pleasant to drive, however Mazda has a bit more sporty/stiff suspension and you can feel it. It is glued to the road very well and it is a pleasure to drive on mountain roads. You can feel, though, that the front bares the task of supporting heavy 2.2 diesel.
Honda seems a bit more lightweight on the road, because of the lighter engine and softer suspension. It is a good compromise between sportiness and comfort.
The suspension in Honda can be adjusted a bit. There is a damper button that allows you to make the car a tiny bit stiffer and reduce the body roll. It makes a nice, however a delicate difference.
Honda seems louder! Not sure if it is because of worse sound deadening of maybe louder tires! I have no idea, but this was my initial impression. It is probably because Mazda was a sedan and Honda's hatch does not have a proper shelf in the trunk, but some flexible cover which is nice and practical, though.
Diesel is louder on high rpm's and idle, but at low rpm they both are comparable and quiet.
Brakes on Honda are completely different league! Those on Mazda are very average and the brake pads are quite soft - they wear out very quickly and mess the rims with the dust really bad! On the other hand, Honda has very sharp brakes, very good feedback and time will tell how long they last and if those are messy.

Summary:
Mazda has more sporty and luxurious feel, while Honda is more practical/utility hatch. Honda has more gadgets and safety features, complicated infotainment (in comparison to Mazda) and better safety features. Honda's gearbox is much smoother and has a shorter path, while Mazda's diesel is obviously with much higher torque and offers better ride at low rpms and high gears. Mazda diesel is a pleasure to drive on highways at high speed, where as I think Honda will be a bit louder and less economical.
Honda has much more practical space inside as well as feels bigger inside.

If it wasn't for oil dilution in the diesel, uncertain future for diesels because of Volkswagen and insurance cost/general cost to keep the Mazda - I would have not gotten rid of it. I chose Honda because it has a less problematic but still economic petrol engine, is cheaper to insure and keep, offers better reliability track record than Mazda.
Mazda's diesel is really nice motor, but the oil dilution problem scared me away from it. As well as many reports on those diesels dying before 60k miles or shortly after.
Funny thing is, that DI gas turbo engines also have oil dilution problems, but not to an extend of Diesels with DPF.

Both cars are great but now, I think that Mazda needs to do some catch up game to Honda and other cars in the segment. Thanks! 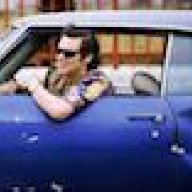 The motor tax there in Ireland based on CO2 is smashing hard petrol engines. +1 for choosing a petrol engine there.
'17 Golf GTI DSG, ex: '17 Honda Civic 1.5t CVT

Thanks for the detailed write-up. North Americans are slated to get the 2.2D for the very first time in the CX-5 this summer. It has been a long road for the 2.2D for Mazda with many broken promises. The rising oil level/fuel dilution problem has been a complaint for many years. I thought Mazda would have solved it by now.
OP

Ok, after a 2k kilometres I have to adjust my opinion.

Civic feels "cheap" inside in comparison to Mazda 3. Mazda is more refined, luxurious and assembled better. Civic makes strange noises in the cabin, sometimes it rattles somewhere in the dashboard, sometimes some strange noises are coming from behind the sunroof console (sounds like Velcro) etc. No such problems in 1 year old Mazda, yet such problems from brand new Civic... Disappointed.

Also, I already managed to have one "electronics" problem in Civic - for a brief moment computer displayed a message with automatic high beams. After turning off and on the car, message did not reappear but still - makes you wonder...

If I could turn back time I would probably hold off with the trade in. I traded in more refined and comfortable car for a sporty wannabe. I miss the torque from 2.2 diesel combined with excellent fuel efficiency - however the dpf... I guess you can live with the dpf and regardless how wonderful Mazda was, it would have been extremely expensive to maintain. Civic is much cheaper to service and repair, if anything (knock on the wood) fails.